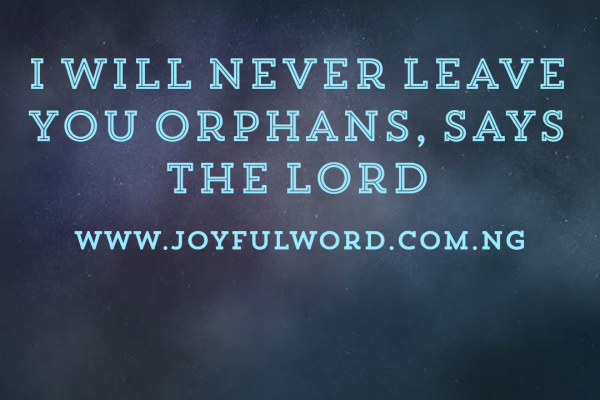 I WILL NEVER LEAVE YOU ORPHANS, SAYS THE LORD

The Lord Jesus prayed to His Heavenly Father in our Gospel passage today. In today’s portion, Jesus spoke of the glorification of God as the Son of God would soon glorify the Father by what He was about to do, in perfect obedience and following what the Lord has willed, that for the salvation of the world, the Son of God and Saviour of the world had to suffer, to bear the pains of the Cross which are the suffering and the burden of the sins of mankind.

Yet, it was precisely by humbling Himself so completely and by obeying His Father’s will so completely that the Lord Jesus accomplished exactly what God has planned for the salvation of His people. The Lord Jesus took up willingly the heavy burden of the Cross so that by His humble obedience, He might reverse the damage and harm that sin had done to each and every one of us, and glorify God in all things. In our first reading today, St. Paul bid goodbye to the community of Ephesus; he spent approximately 2 to 3 years preaching the Gospel of Jesus Christ in that community. What a bold proclamation we have from Paul in today's first reading! In imitation of Christ, who in today's Gospel said in His farewell prayer to the Father that He has not lost any of those the Father gave Him, so Paul in saying farewell to the presbyters at Ephesus said that He is not responsible for the blood of any of them.

In other words, Paul is saying that He handed on to them faithfully what He himself received, and did not neglect to tell them anything necessary for their salvation. St. Paul at first encountered great enthusiasm from the Jews there as he preached to them in their synagogue, but later, when opposition arose, he moved to the public hall where his message was heard by many. As he gets ready for his departure, Paul makes preparations to go to Jerusalem. From Jerusalem, St. Paul would go on to Rome where he would finally be martyred, and his preaching was based on his many experiences of being ridiculed and rejected, oppressed and made to suffer because of his faith and obedience to God.

We we should learn from the examples shown by the Apostles and by the Lord, in their obedience to God’s will in all the things they do and in all that they had to endure because of their obedience and faith.

Let Us Pray: Lord Jesus, give me the grace to finish well and in the end may your name be glorified. Amen.