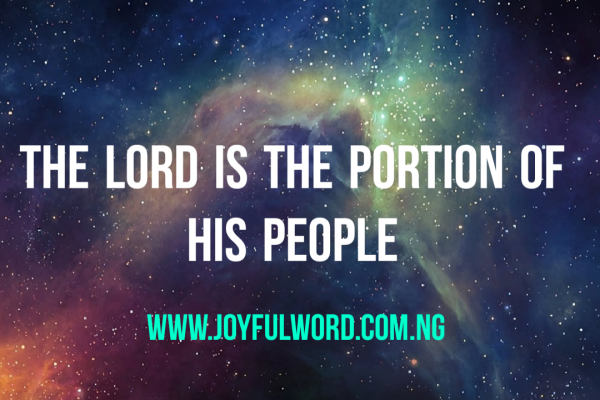 THE LORD IS THE PORTION OF HIS PEOPLE

The first reading places us in the context of the ending of the founding story of Israel. Moses, the great hero, and God’s good servant is dying but the work is not finished. Moses is not going to lead God’s people into the Promised Land. Obviously, the people had put their faith in Moses by this time. He has led them for the better part of forty years and they can see the end of the road on the horizon. But Moses insists that it is God who has been leading them and will continue to do the leading. God has chosen a new servant for this last phase of the project, just as God had chosen Moses was the earlier phases of this complex and very dramatic journey.

The point here is that anyone who has put faith in Moses has misplaced it and must now put his faith NOT in Joshua, but in the Lord, and no one else. It does not matter who the servant leader is, it is God who is really doing the work and is bringing forth a people on the land. In the reading, Moses encourages the people and their new leader Joshua to have courage based on trust in the Lord as they face their new challenges.

In today’s Gospel the disciples, were quarrelling among themselves over who is the greatest in the Kingdom of Heaven and the question were thrown to Christ. And in a surprise move, to the disciples, Jesus brings out a child. A child, to their thinking, surely could not be the greatest. Children then had no place at all. They had no rights, they were subject to their parents and practically everyone else. A child would seem to be the opposite of the greatest. But Jesus says that children are humble, perhaps as opposed to the disciples who very recently were jockeying for power. Children are innocent and trusting. And He insists that the disciples’ welcome children and other humble powerless people in Jesus’ name. They are specifically warned against turning away anyone who would seem unimportant.

But a shepherd with a big herd who found one of his sheep missing would search for that one sheep, even though he had 99 more, and rejoice at finding that lost sheep. A sheep, childlike, is lowly and is also trusting. It’s the shepherd’s job to keep track of the sheep and keep them safe. Even if the shepherd might not feel the loss of one sheep out of a hundred, what would happen to the sheep that went astray? It would be in danger, out of the protection of its community. The shepherd has a responsibility to protect all the flock.

The shepherd who finds and regains the lost sheep not only feels joy at regaining his property that might be lost but also relief in knowing that the sheep is now safe with the others. God rejoices in the return of one of his own who was thought to be lost but is returned. But it’s not only because God wants a bigger following, but because He realizes that we, like sheep, out of our community are lost and in danger. Returned to the fold we can be safe in His protection in the Kingdom of Heaven.

Let Us Pray: Lord Jesus, help me to stay focused and to do your will always. May I be childlike in my attitude. Amen.