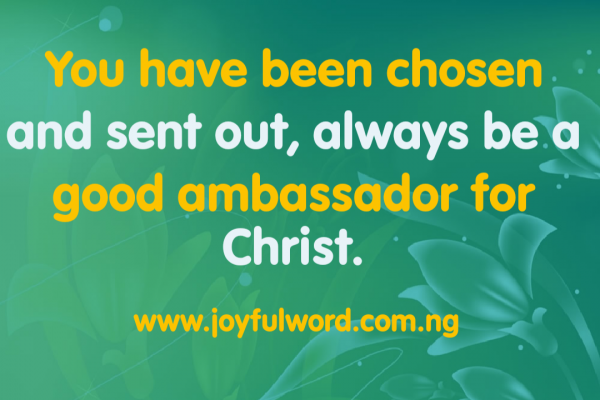 Saint Paul admonished the people in the first reading of today to be rooted and built up in Christ and established in the faith. This is the only way we are going to be counted as true disciples of the Lord. We must be rooted in Christ because He is the greatest and if we are in Him we will have the power and authority to work in His name and also become victorious over the forces of darkness just as He disarmed the principalities and powers and triumphed over them on the cross.

If we are rooted in Christ, we will not be deceived by those who carry false and empty message according to human philosophy and tradition, because we will be able to detect them when they come. We will have life and we will be able to sow the seed of life in others. We will become apostles of Jesus everywhere, spreading the message of the Good News that gives life.

We see in the gospel reading of today how Jesus, after praying and spending a quality time with the Father through the night, called those He chose as apostles to work with Him and for Him when He was gone from them.

We must learn from Him to value prayer and to believe in the efficacy of prayer. God gives us guidance through His Spirit when we pray and He helps us to make and take the right choice and decisions in life respectively. Through prayer we will become victorious over the force of evil and we will be able to do great and wonderful things in the name of God.

Jesus chose the apostles so that they will represent Him and tell the world about Him when He was gone. They were not qualified for that role according to human standard and calculations, but God's choice was the best because they worked very hard to carry the Good News to the different parts of the world. In the same way we have been chosen by Christ by virtue of our baptism and calling to represent Him in this life and to be the book that people will read about Him so as to come to believe in Him.

Since you are in Christ, you must not relent in representing well the one who has called you to come and be with Him. Let the world know about Him through you. You may not have all the qualities that the world wants, but if you give yourself to Christ, He will transform you and use you as you are to make name for Himself in your apostolate.

Good morning dearest one. SmileðŸ˜Šas you do your work and do have a wonderful day. May Jesus who has called you to follow Him, give you the grace to remain steadfast till the end. Amen. And may the Almighty God bless you: the Father and the Son and the Holy Spirit. Amen.

Watch-Word: And all the crowd sought to touch Him, for power came forth from Him and healed them all.

You have been sent out by Christ as an apostle, represent Him well and let the world know about Him.

(Tuesday of the 23rd week in the Ordinary Time, Year C)

A BLESSING FOR THE NEW MONTH