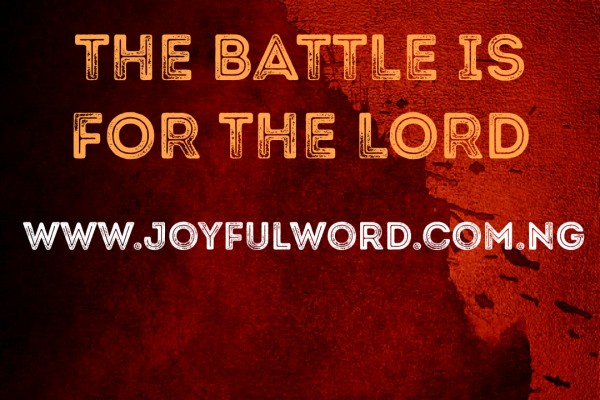 THE BATTLE IS FOR THE LORD

We are confronted with various challenges on a daily basis as Christians and soldiers of Christ. Infact, it is a battle between the light and darkness. We belong to Jesus who is the light of the world and as a result of that the forces of darkness will not let us be, but will keep fighting to bring us down and make us to be like them.

The first reading of today is a clear example of what happens to us when we are in the Lord. Goliath was a giant and a man of war in whom the philistines put their hope and his presence was putting fear in the hearts of the people of Israel and no one could challenge him. He even insulted the God of Israel and vowed to destroy anyone who dare come out to face him.

David was not a man of war and truthfully was ill equipped when compared with the experienced and well equipped Goliath. However, at the end of the battle, Goliath and the philistines were defeated and David became victorious. The victory was not as result of David's power, but simply because He fought in the name of the Lord. God gave Him victory over Goliath and the dignity, honour and integrity of the people of Israe were restored.

When it comes to battle we must acknowledge that without God we can do nothing. The power of God is made manifest in our weakness. We must always let God fight for us and He will give us victory over every Goliath that may stand on our way. Be courageous and stand up against every oppressive force of evil in the name of God and you will surely overcome.

I do not know the battle that is facing you at the moment, but I am sure of one thing, that if you humble yourself and submit to the authority of the Lord and let Him lead you into the battle line, you will come out victorious. Call upon His name, For His name is mighty to pull down every stronghold. Fear not, like the people of Israel, but courageously stand up against those 'Goliaths' tormenting you and defeat them in the name of the Lord.

Jesus was never afraid to do good even when the Pharisees 'fought' to stop Him from healing on the Sabbath as we have recorded in the gospel reading of today. He healed the man with the withered hand and restored him to health and his adversaries were put to shame. Therefore, fear no more, call upon the name of the Lord and let Him speak and fight for you and win you victory, for at the mention of the name of Jesus every knee shall bow... and every tongue will confess that Jesus is Lord, to the glory of God the Father.(Phillipians 2:10-11)

Good morning dearest one. SmileðŸ˜Šas you do your work and do have a wonderful day. May Jesus fight your battle and may your victory come with great testimonies. Amen. And may the Almighty God bless you: the Father and the Son and the Holy Spirit. Amen.

Watch-Word: Blessed Be the Lord my Rock!

The Lord is my stronghold and fortress. He is my shield and in His name shall my victory over every challenge of my life come.

(Wednesday of the Second Week in the Ordinary Time, Year II)