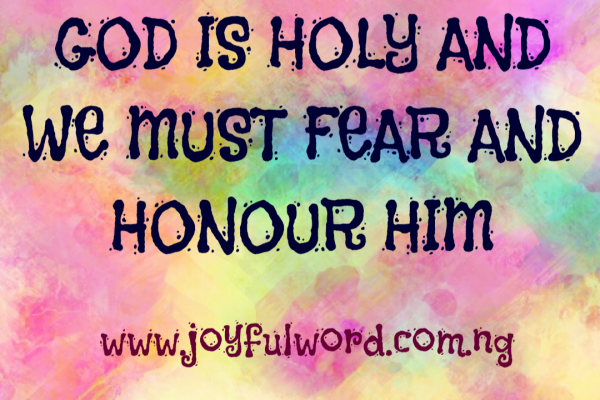 GOD IS HOLY AND WE MUST FEAR AND HONOUR HIM

The king Belshazzar who took over from his father Nebuchadnezzar did an abominable thing before the Lord and he lost his kingdom. He desecrated the sacred and what was offered to the Lord. He was carried away because of excessive wine and he lost control and acted in a manner that is displeasing to the Lord. He went and brought all the sacred vessels used in the worship of the God of Israel in Jerusalem and used them to entertain his guests.

His reckless and disrespectful action came at a cost, because it cost him the kingdom. They drank the wine and praised the gods of silver, bronze, iron wood and stone. Their action angered the Lord of host and a hand wrote on the wall what he could not understand. Daniel was brought in to interpret and he explained to the king what was to happen as a result of his behaviour.*_

This story is something that should move us to reflect on how we treat what is dedicated to the Lord, like Church, persons and other sacred vessels. Do we treat them with respect or we just see them as ordinary things and as such, handle them anyhow with levity. whatever is offered to the Lord is sacred and should be treated as such. We must never let our familiarity with God, his ministers or the things used in His worship make us lose our sense of the sacred and as such begin to treat them as ordinary things.

How do you behave when you are in God's house? Is your attitude and action worthy of someone who knows that God dwells in His house? If we throw discipline away, we can behave in a manner that is worse than what the king has done. We must always approach God's temple with reverence and awe and we must respect and honour the persons who serve Him and the things used for His worship. We must never take the opportunity we have to be near the Lord's house or altar for granted, because the Lord is supreme and he is not in the same equality with any created thing.

The king lost the virtue of self-control and he was proud and that made him not to respect the Lord and the sacred vessels that has been used to worship Him. Yes, they all drank from it, but it came with a cost and the punishment was something he never expected. We must learn to be disciplined and control ourselves even when we make merry in order not to be carried away by emotions and we do what we are not supposed to do or act in a manner that will be disrespectful to God or His ministers whom He has chosen to do His work.

We must never get too familiar with the things of God that we will no longer see sacredness in them. We must always strive to respect the border line between the ordinary and the sacred and in this way, we shall respect and honour God and God in turn will bless and keep us. Daniel told the truth to the king and He was not afraid to speak as the Lord has given him wisdom and utterance. Such confidence should be in us always and we must be ready to speak the truth no matter who is involved and in that way we shall honour God and He will bless and keep us.

Good morning dearest one. SmileðŸ˜Šas you do your work and do have a splendid day. May God's grace help you to be disciplined and to always honour and respect those consecrated to serve Him and the things used in His worship. Amen. *And may the Almighty God bless you: the Father and the Son and the Holy Spirit. Amen.

Watch-Word: Be faithful unto death, says the Lord, and I will give you the crown of life.

If you love the Lord, you will respect and honour Him and and He will bless and keep you. Reverence and respect the sacred

(Wednesday of the 34th week in the Ordinary Time, Year 1)